Voting in my First Swedish Election 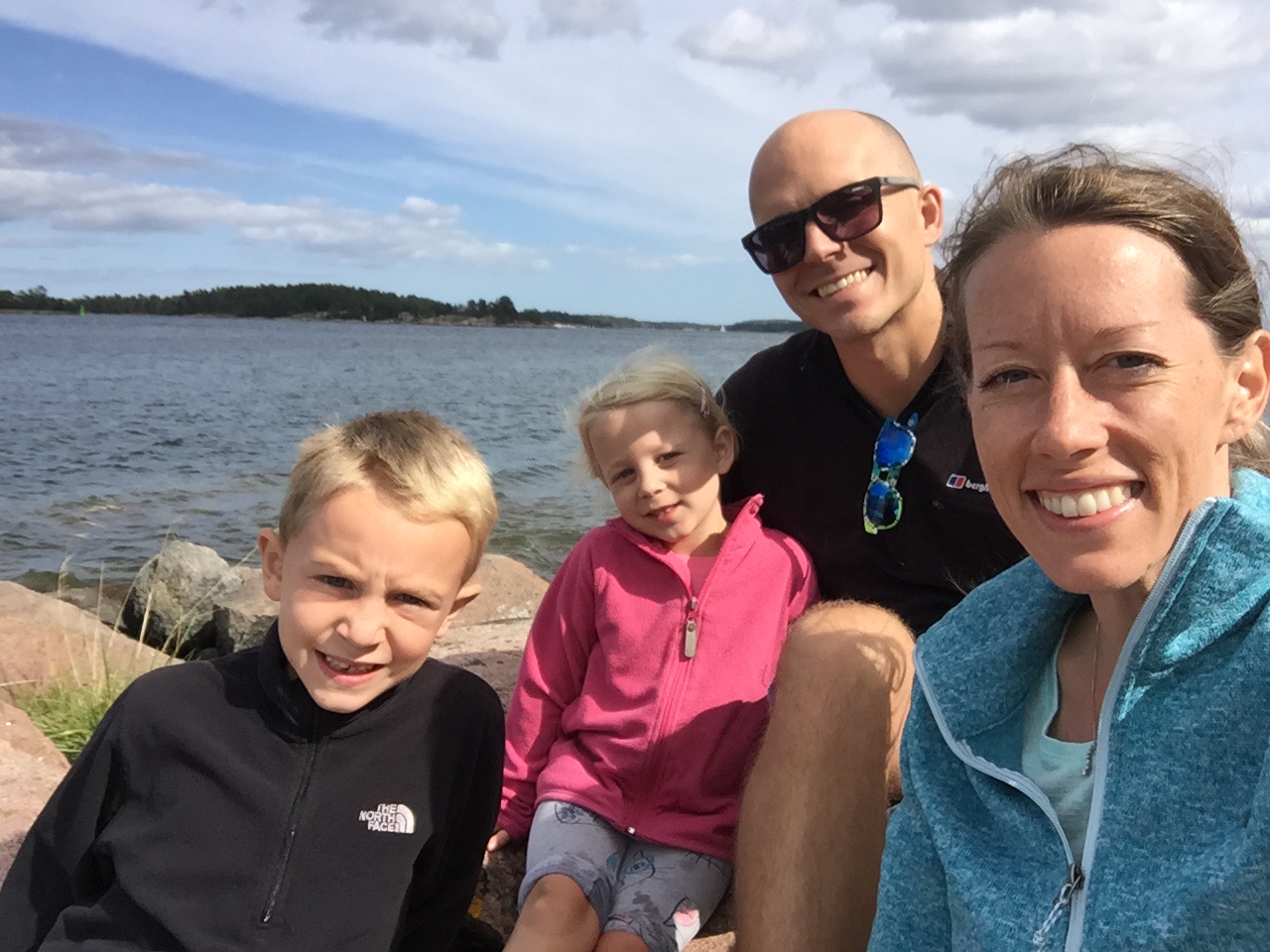 In this era of anti-immigrant sentiments, I find it more and more important for me to self-identify as an immigrant. Mostly, so my American friends and family start to associate my white face and educated background with the term, instead of the racial minorities that are usually painted in such a negative light by politicians to inspire fear and distrust for their own gain.

Like many countries, Sweden is also facing a growth of far-right, anti-immigrant, pro-nationalist wave and never was that clearer than in the months preceding Sunday’s election.

Does everyone secretly (or not-so-secretly) hate us?

I saw anti-immigrant statements by the Sweden Democrats in radio and television debates, articles, and discussions within my community’s Facebook groups. They call themselves the “anti-immigrant party” so it’s not like they are trying to hide their agenda or anything.

The reply that kept getting thrown about was, “Freedom of speech. They are allowed to say what they want. Let them speak,” whenever someone would criticize their message as racist and xenophobic.

Yeah, but your right to say whatever you want doesn’t mean that you aren’t saying hateful, racist, and anti-immigrant statements. Don’t forget that.

The Sweden Democrats’ symbol used to be a torch—because they are fascists—but they have since rebranded their logo to be a much gentler looking blue and yellow flower in bloom.

They must’ve realized that a wolf in sheep’s clothing makes it easier to stand among a herd of sheep.

This rebranding may fool some, but everyone knows the party has white nationalist roots. Again, they aren’t hiding that fact and they don’t deny it.

With their promises to revoke dual citizenship rights and flat-out rejection of multiculturalism combined with the “Oh, let them speak,” comments I was hearing from people around me put me on edge, to say the least, as we awaited the results of the election.

To nationalists, I’m not enough of either nationality to belong in “their” country.

But life isn’t black and white and culture doesn’t work like that. Sweden is already multicultural and has been for decades. There’s no undoing that no matter how much the fascists may want.

Figuring out who to vote for

There are eight different political parties in Sweden, so figuring out who to vote for at each level of government required a lot of research. I could cross off the nationalist parties easily, so that winnowed it down a bit.

Fortunately, Radio Sweden and Valkompassen had quizzes voters could take on every political issue in order to gauge who was the best party for each voter.

After taking multiple quizzes, I discovered that I aligned most closely with the Center party. I matched on 64% of their issues, which is pretty significant considering there were eight parties.

Unlike in the US, where you kind of feel like you are voting for the least toxic/least dangerous-but-still-icky candidate, I felt good about my Swedish political party selection.

I even knew some people on other ballots and felt confident in casting my votes at the various levels of government. 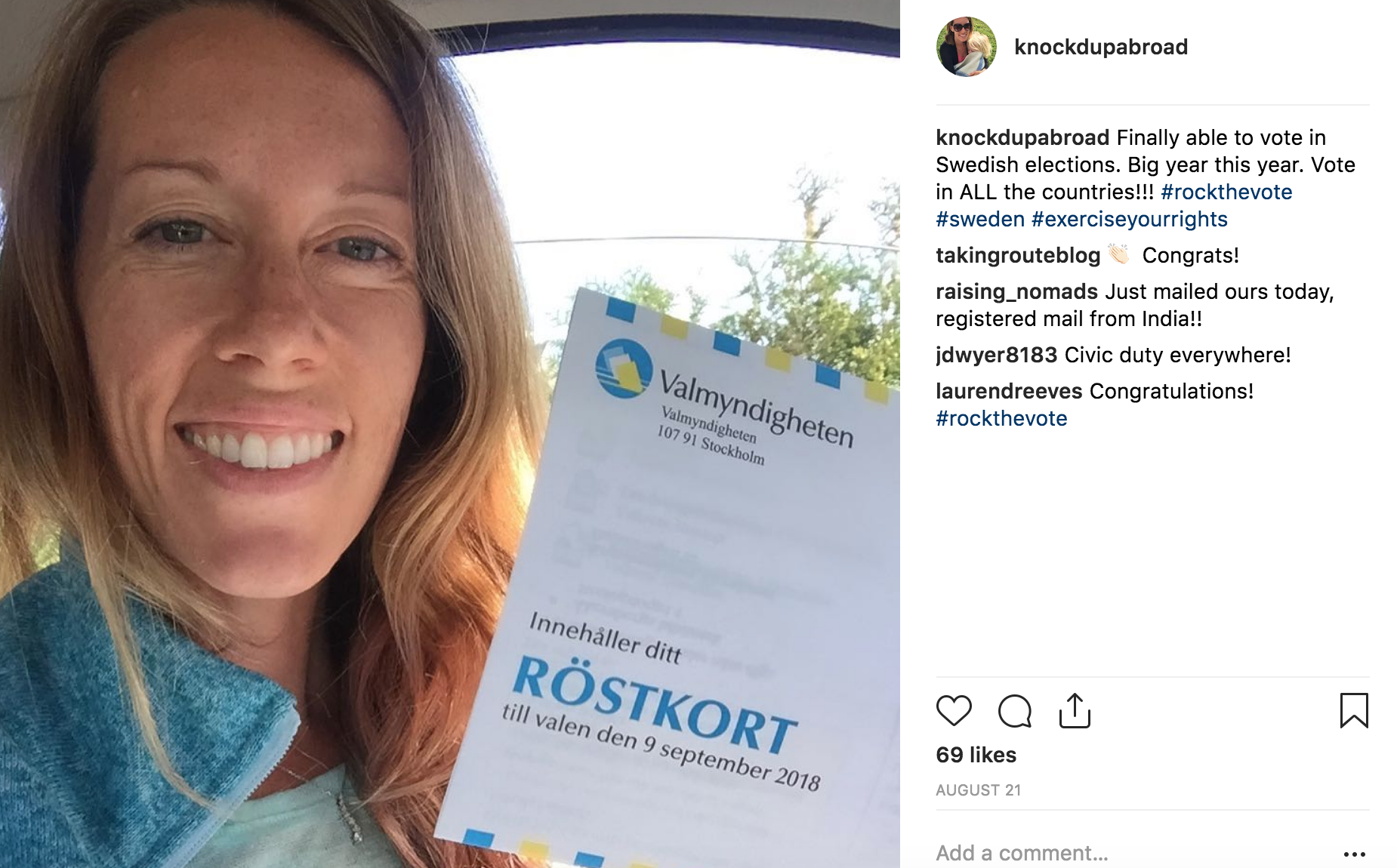 Each election deals with the three levels of government—national, regional, and local (kommun) level and one can submit a blank vote for the party or a vote for a specific person in each party at each level of government.

Despite there being around 20 names, job titles, and resident locations on each ballot for each party at each government level, the voting process itself was quite simple.

A few weeks before the election, we received our Röstkort in the mail which told us the voting locations nearest us for submitting our votes and provided dates if we wanted to vote earlier than on election day.

I biked to our polling location, walked past the party representatives who were doing some last minute promotion, and spoke to the woman who greeted me. She handed me three empty envelopes and directed me to the stack of voting ballots for each party.

There were three election officials working and two high-top desks surrounded by a blue curtain with the obligatory pen attached to a string.

A bank of paper cards in the three colors (for each level of government) was provided for every party and I selected my papers, walked behind the blue curtain, and crossed off my selections. Placing each piece of paper into its own envelope, I noticed a cut-out at the bottom of the envelope which allowed the color of the paper, but no pertinent information, to peep through.

I took my cards to the election official sitting at the desk and handed over my röstkort and national ID. He read my name and birthdate aloud to his colleague who found my name in his large book and crossed it off.

He then took each of my envelopes and placed them into wooden boxes that were labeled by color and government level. Satisfied that my votes were submitted, I walked out happy to have done my civic duty.

The entire process took about five minutes and that was because I selected the wrong ballots at first and had to go back for new papers.

The manual paper ballots ensure that votes can’t be tampered with electronically, although, counting and submission mistakes still happen. One county submitted the county figures instead of the national numbers and the correction shifted the needle by one seat.

All in all, the process was simple, streamlined, and very easy. All people who are eligible to vote are automatically registered.

“It’s always a good day when fascists are upset.”

With so much on the line, as an immigrant, we were watching the results with trepidation.

Within our kommun (our town), the fascist party, Sweden Democrats, doubled in popularity. That means that 1 in 10 people voted for them. That’s a lot of anti-immigrant sentiments. Gross. 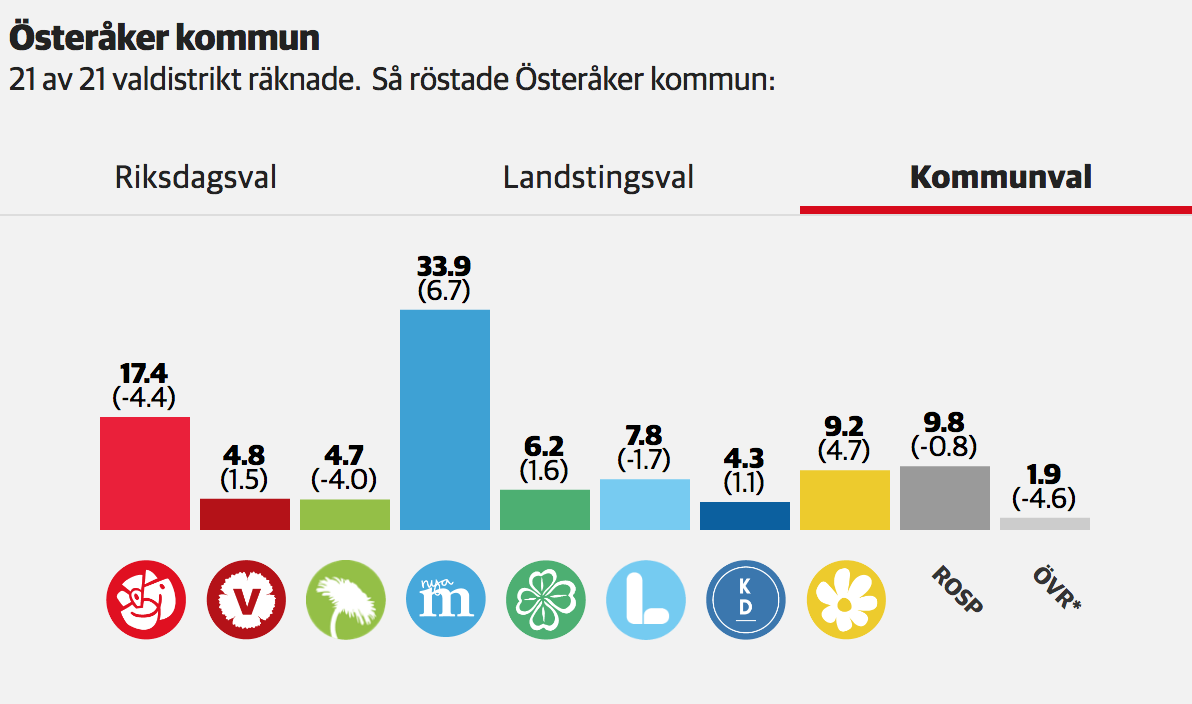 Overall, the fascists remained in third place, where they were before and were disappointed they didn’t score higher. It’s always a good day when fascists are upset.

As much as this election didn’t have the slam dunk warm embrace we love you even though you’re different outcome, it means that we won’t have to give up our dual citizenship.

The results mean that the immigrants already placed in Sweden will continue to receive assistance in integration.

The rise of the far right party should not be ignored.

The two political blocs who will create legislation need to start having more difficult conversations in order to prevent even more people from seeing extreme fascists as the only people who will listen to their problems.

Is there a place for racist hatred in our community?

No, I don’t want to tolerate that. But I think important topics like immigration, integration, and employment need to be addressed.

More politicians need to listen and provide real solutions so more constituents feel empowered by the main political parties and not left behind or ignored.

The US can learn from Sweden

As an immigrant voting in my first Swedish election, I will say that Sweden made it very easy for me to be properly informed about the political parties’ priorities. Voter registration was automatic and there were zero barriers for me to access my polling place and register my vote.

Election officials were on hand to explain everything to me should I have any questions, and it all seemed very secure. I felt confident that my vote was registered. I felt like it made a difference, even if a small one.

I voted for all of the immigrants who haven’t lived here long enough to have that privilege. I voted for more resources to help those who are already in Sweden integrate and find employment more easily.

I feel that when voters feel disenfranchised, they are less likely to participate in the process.

When voters can’t identify their values with a particular political party, they opt out of it altogether. We saw that clearly in the last US presidential election in 2016 with a 20-year low voter turnout.

Talking about politics is always controversial but we can and should discuss the barriers to participation in the electoral process.

If you can’t vote in your adopted country because you aren’t a citizen or because you move around too frequently to establish those rights, then I encourage you to still participate when you can. Volunteer at events for political parties with priorities you value.

Politics affect our lives in such a visceral way. For us immigrants, it can be the difference between surviving in a foreign country and thriving.

We need more immigrants to be politically active whether they can cast a vote or not. 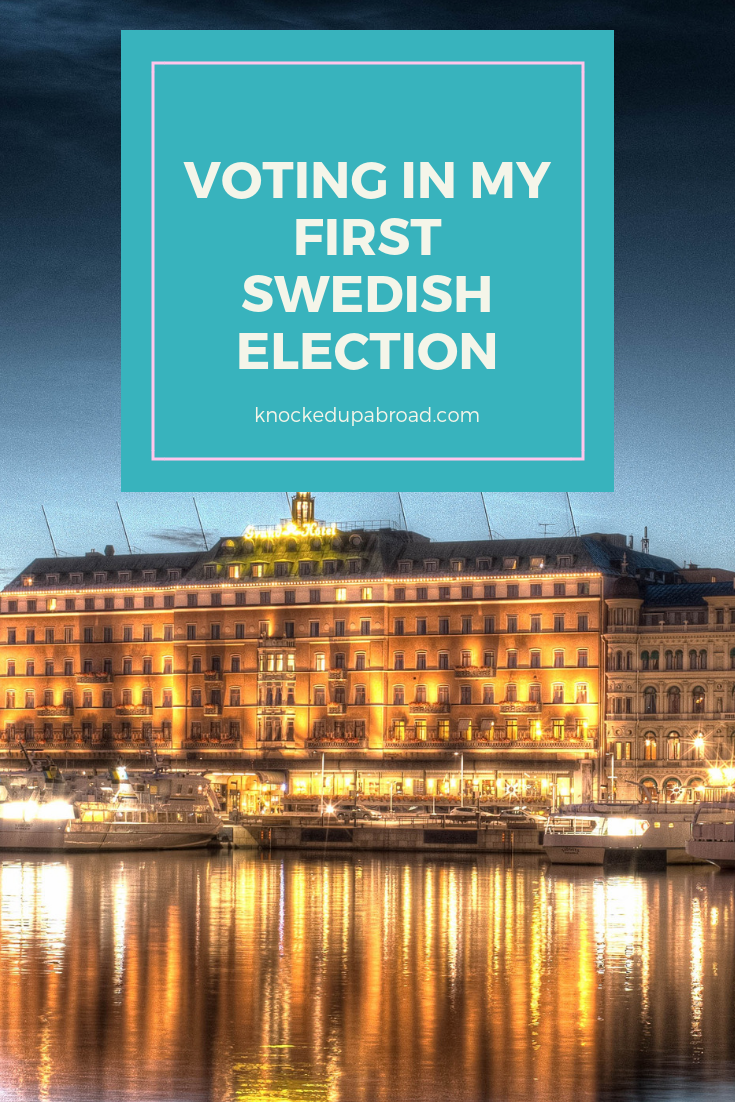 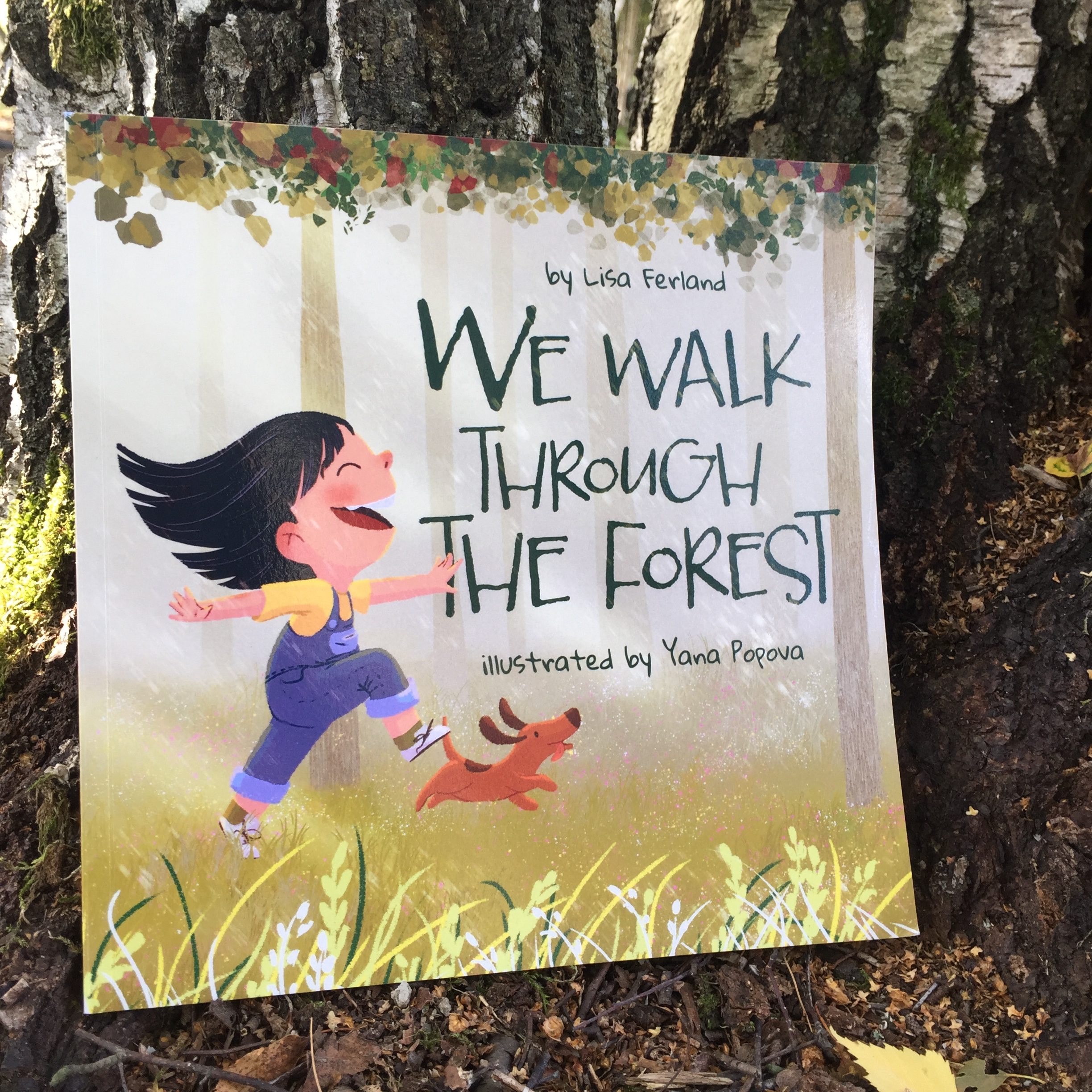