Pushing the Limits—The Role of the Firstborn Child 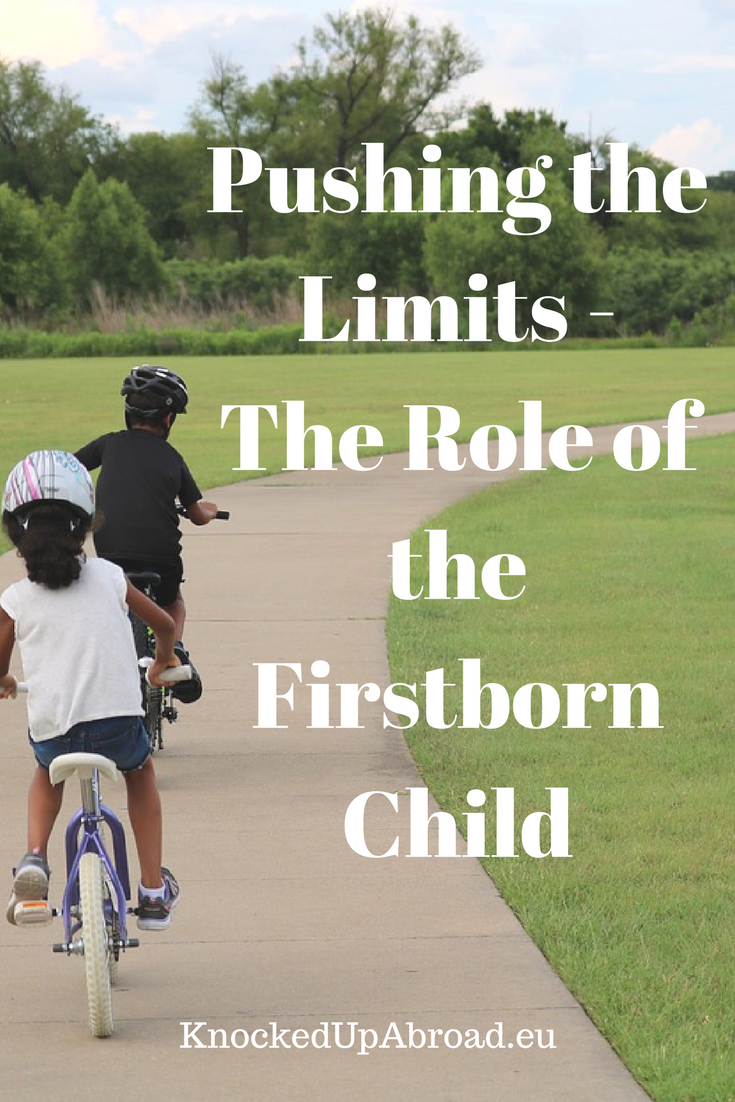 My approach to parenting involves a lot of shrugged shoulders and raised eyebrows to indicate that, “I have no idea what I’m doing, but I’m hoping for the best.” Based on my conversations with other parents, we’re all in the same boat.

A few months ago, I was asking a fellow American-in-Sweden parent at what age is it culturally acceptable for kids to bike by themselves to school and to friends’ houses? The answer was a bit vague—well, depending on the distance, your kid’s ability, comfort level, etc., etc., you know how it is. Basically, the advice was to launch the bike riding kid in steps. You slowly remove yourself from the equation and increase the distance and time they have on their own.

For this American dad, he drops his seven-year-old daughter on the pedestrian/bike path, and off she bikes solo from school to home. He then follows along on that same route a few minutes behind her in case she runs into trouble or needs help. That seemed like a reasonable approach to me.

Our neighborhood has a lot of cars since we are further out from the city center, but we also have very wide designated footpaths for pedestrians and bikes. There is a wide grassy margin between the path and the road so even an out of control bike should find a safe, soft landing.

Summertime is here, the weather is sunny, and I’m looking to strike a parenting balance between laissez-faire and complete neglect so that I can relax as well as let the kids have free reign outside. What can I do that won’t get me a side-eye from the neighbors? Hmm…

My six-year-old son had a playdate this morning with his friend who lives down one street, up a hill, and down another street. We biked it yesterday, and it took us around 10 minutes door-to-door. This morning, he announces that he’s old enough (he’s six) to bike there on his own.

He is cautious and pulls off to the side of the road to wait whenever he sees or hears a car. If anything, he’s too cautious, if there is such a thing. His insistence that he could do it on his own coupled with my summertime lax attitude (and previous cultural research that this wouldn’t lead to the cops knocking on my door) led to a “Sure, honey!” and a text to the other mom.

Me: Hey, we are trying something new, and he’ll be biking over by himself. Can you text me when he arrives?

Other mom: Of course! How fun!

Before he left, we went through a few more hypothetical scenarios and what ifs and off he went, waving goodbye while his sister shouted at him to be careful. I watched him bike down our street and then peeked out my back window until I saw his little helmet at the bottom of the hill. From there, I knew he’d be all set.

Other mom: He arrived safe and sound! See you at 2!

In total, it took him nine minutes door-to-door, and I’m sure he felt a tremendous sense of accomplishment. This was a big step toward childhood independence for all of us. We are always treading on virgin ground with our first child. They are the first to push our boundaries and comfort zones.

Was I nervous? A little. Nothing is without risk, but I was less nervous after he reassured me before he left, “I can do it because I believe in myself and when you believe in something, you make it happen.” His pep talk was all the convincing I needed to let him try.

[Tweet “I can do it because I believe in myself and when you believe in something, you make it happen.”]

I know that not everyone’s neighborhood is conducive to allowing kids to bike freely on their own but maybe some are. Having a parent on the receiving end who doesn’t think you’re insane is a good start, wide sidewalks or low-traffic roads are also a big help.

When was the first time your kid biked without you and how did it go?

Read more about parenting in foreign countries with the Knocked Up Abroad series.
Ebooks are ONLY $3.99!

The Perfect Relocation in an Ideal World Life in the 1800s, I mean, in a Swedish stuga