Wira Bruk is an old iron works village that was active back in the heyday of Sweden’s superpower era when they were cranking out weaponry as fast as they could.

It’s the site where the King’s weapons (read: swords) and townspeople received tax credits for supplying Sweden with iron goods.

Visiting Wira Bruk is like taking a stroll back in time and it is well worth a gander.

But let’s talk about their Christmas market, shall we?

Wira Bruk has hosted a julmarknad (Christmas market) for the past three years during the first advent weekend.

Be ready to be shocked by sights not usually seen at other Christmas markets.

Have you ever seen a dragon’s skull (that’s surprisingly small)?

Or how about a 7″ tall stone troll (that’s surprisingly realistic)?

No? Then get yourself over to Roslagen’s Wira Bruk because they have them all on display. 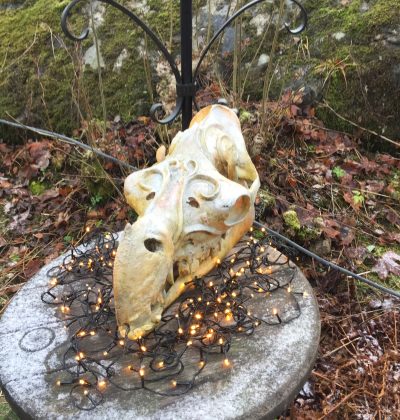 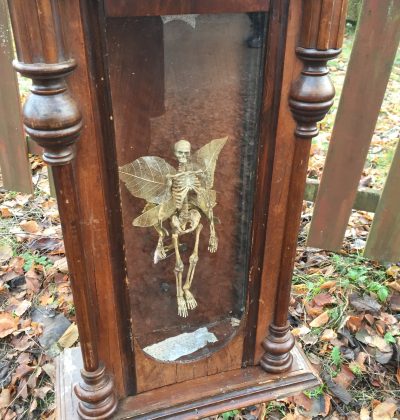 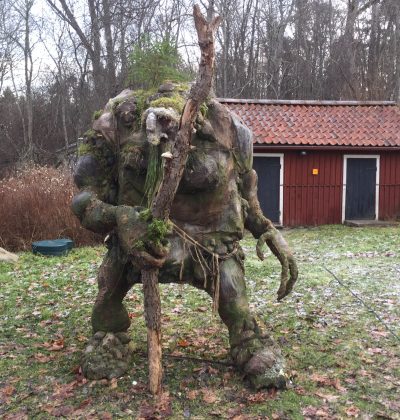 Part of me wondered if these installations were left up from Halloween but the other part of me didn’t care because they were shocking.

This shock led to delightful squeals of discovery from my kids and they raced around the town looking for the next “hidden treasure.”

To boot, there were tons of local vendors selling cured meats, fried herring, warm glögg, and warm nuts. I finally got my warm nuts in a paper sack!

I don’t ask for much from Christmas markets but man, did Wira Bruk deliver on all fronts. 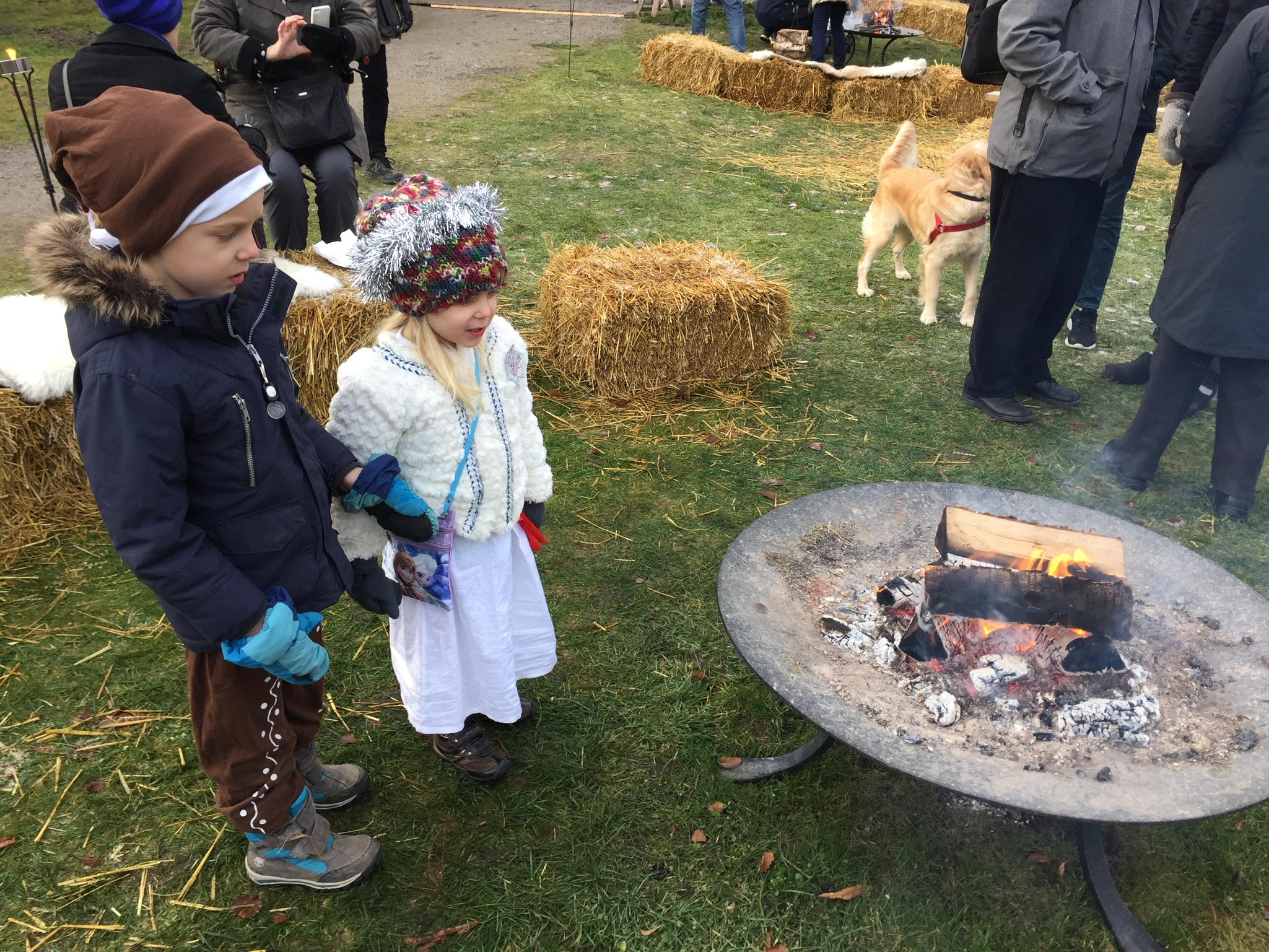 You really can’t beat the atmosphere of an 18th century village. It has charm built into its bones already but somehow, they made it even more Christmasy with wood burning fires, and live music from three accordion players playing Christmas carols.

There were plenty of places to sit and sip on hot cocoa as you warmed your hands by the fire and sat on animal skin (sorry animals) covered hay bales. There were horse-drawn wagon rides, and pony rides throughout the village. 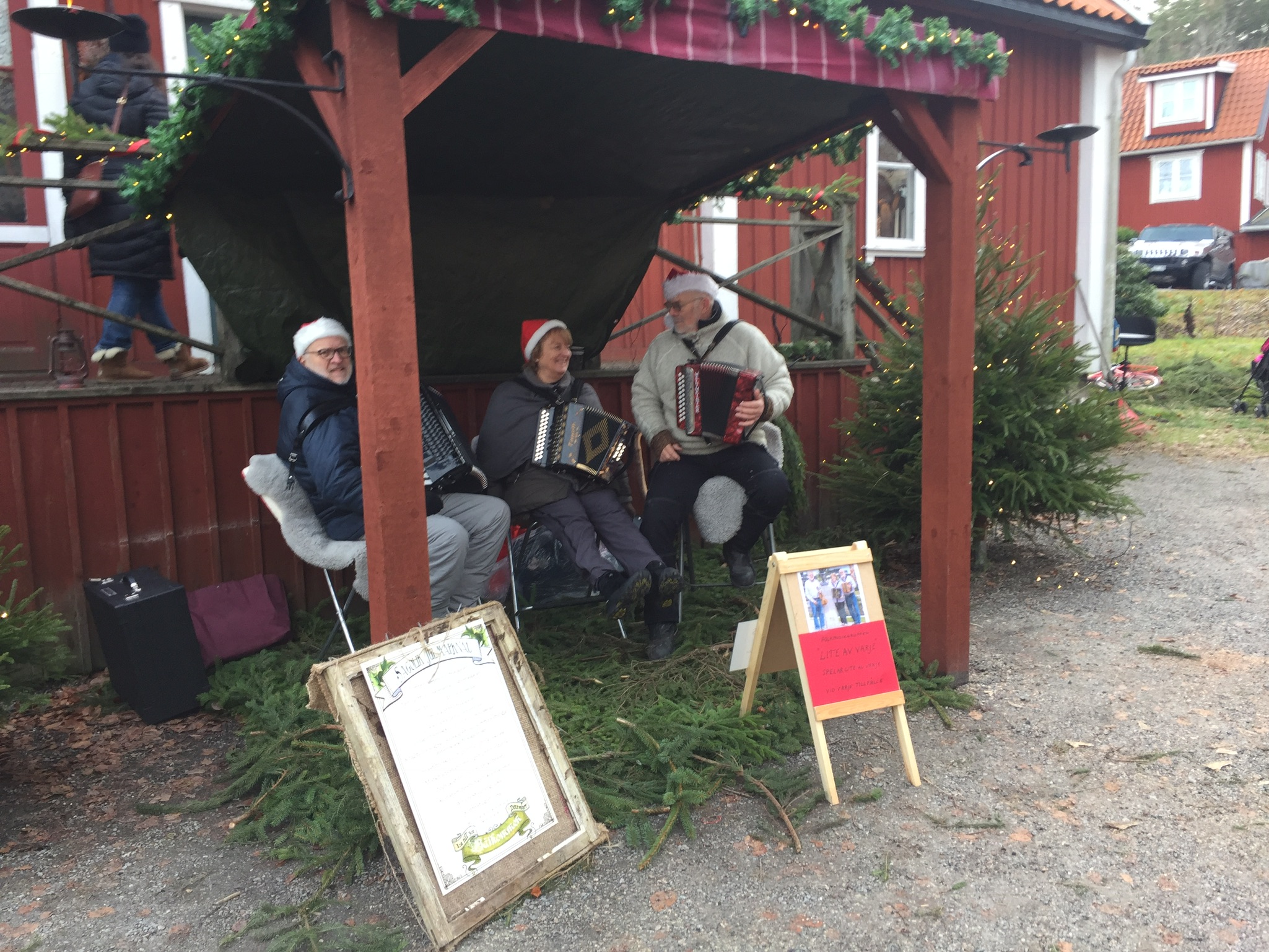 Sure, the river monster was a bit creepy and the fairy skeleton a bit unorthodox, but there were surprises around every corner and the kids loved running from sight to sight. 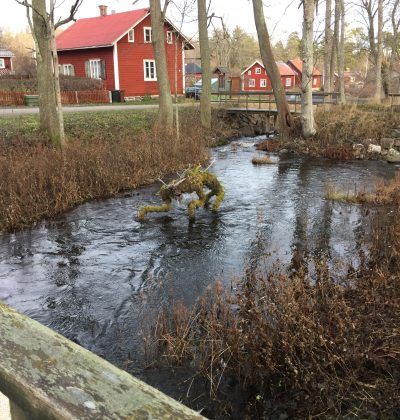 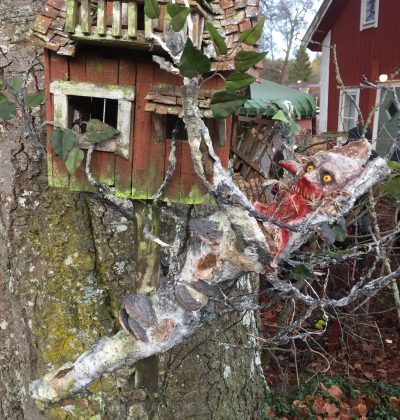 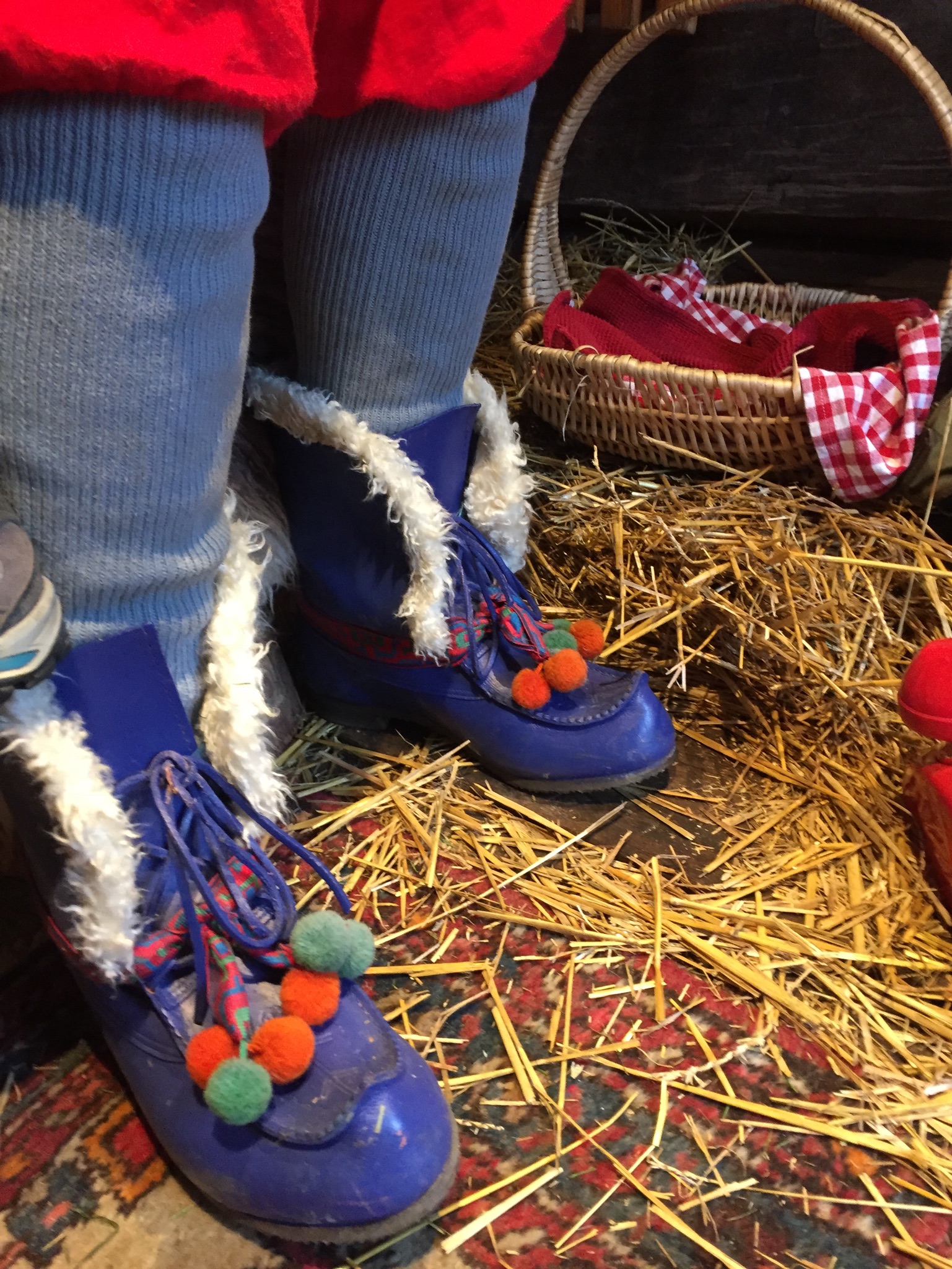 Wowee was this Tomten authentic, right down to his Swedish boots. If you’re looking for a Swedish Santa, then Wira Bruk has your guy.

Tomten sits on sheep skin covered tree stump chairs (I know!) in a little cabin and is surrounded by an old toboggan, wrapped presents, and a straw-covered floor.

This Tomten was a bit clueless when it came to modern day presents so he asked the kids a lot of questions about what exactly they wanted for Christmas which means that each kid received 8-excrutiatingly long minutes with Tomten. Great for the kids but a bit tiresome for the other kids waiting in line out in the cold.

Hopefully, in the future, Tomten will employ a helper Elf or Troll to move the line along a bit faster but our kids loved the experience and felt that they met the real Tomten. 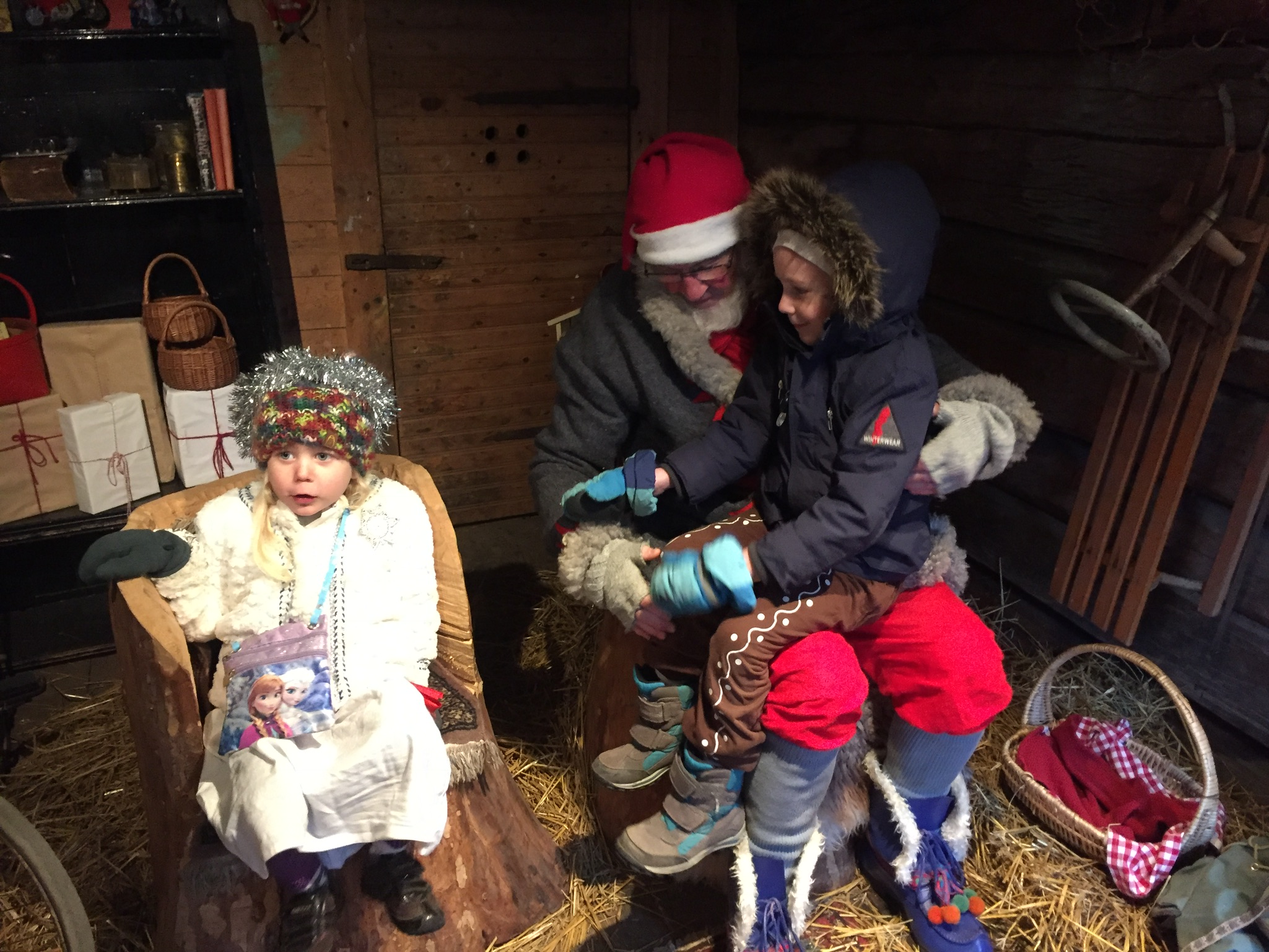 Dress in multiple layers. All of the buildings are from the 1700s and the experience can be very cold depending on the weather and if your kids want to ride any ponies.

Enjoy your day in Roslagen and be sure to sample our local beers.

My Christmas Market Rating: A+

Top notch Christmas market with a beautiful atmosphere that will get you in the mood for Christmas. Not only were the bizarre demons, trolls, and fairies a fun addition to the market but Tomten (Santa) was patient and spoke at length with each child.

The clothing on the vendors were appropriate for the time period and everyone was in the holiday spirit.

This is one Christmas market that I recommend everyone make the special trip to see at least once.

For more Christmas season activities in Sweden, check out the full list of Christmas markets that we are going to visit this year.

There are only so many we can possibly visit in a short period of time, so be sure to comment with your favorites.