The Ridiculous Lies We Tell Our Children 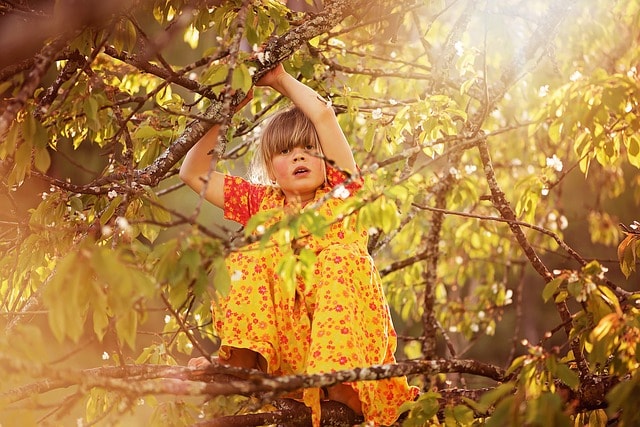 One of the negatives of not understanding 100% of the local language is that I often miss exchanges on the playground between the parents and their children. However, depending on the age of the children, my basic Swedish language skills are enough to help me limp along and follow most conversations.

Yesterday, while at the playground, my son was playing with his classmate from preschool. Her mother was standing nearby when both kids started to climb the tree. That’s when I heard it—a ridiculous lie.

It was in Swedish, but there was no error in my translation. Both kids climbed and laughed in the tree when the other mother said in Swedish, “Don’t climb that tree. There may be snakes.”

Now, to her credit, perhaps she had seen snakes in that tree before but it is highly unlikely due to two reasons: 1) there are only two kinds of snakes in Sweden, and neither one is particularly dangerous and 2) I have never seen a snake in a tree in our neighborhood. Not once. In the Amazon rainforest? Sure, that would be a completely believable warning. In our local woods, we have seen a snake (singular, never more than one at the same time) on the ground, or in a body of water like a pond, lake, or sea (which always skeeves me out) but never in the trees. She totally lied to discourage them from climbing the tree for one reason or another. Probably because they might fall and she didn’t want to have to deal with a broken arm right before summer vacation—who could blame her?

If that was the case, why lie? Why not say, “Please don’t climb the tree because you could fall and get hurt,” instead? Was it because she knew her daughter would be more cautious if she thought there were snakes nearby or that she wouldn’t heed a general warning about safety? The snakes certainly kicked it up a notch and both kids ran away to the swings.

The exchange had me questioning why we lie to our children so often about so many things. I’m not talking about the big holiday lies like Santa Claus or the Easter Bunny—I’m talking about everyday white lies we tell to either encourage or discourage our children to comply with our wishes. I’m just as guilty as anyone else.

Here are a few exaggerations of the truth I have told without flinching:

1. “You need to brush your teeth, or the tooth trolls will take over, and pull your teeth out of your head.

Again, the ultimate outcome is not a lie but the troll thing is stretching it a bit.

2. “If you don’t at least try to poop every day, your rumpa (bum) will explode.

I mean, it may explode…

This one is reserved for behaviors in public that are certainly not against the law but are socially unacceptable like standing on the train’s seat cushion.

4. “Our doggie loves you so much, but she doesn’t want so many pokes to her eyes.”

The lie there is that our dog loves our kids—she doesn’t. She tolerates their presence because even a peanut-brained dog can figure out that she’s on the winning side of a few eye pokes because it means the kids will eventually feed her their food.

5. “If you don’t pick up your toys, the Toy Fairy will visit and take them home with her.”

We created a fictitious Toy Fairy, who cleans up toys that aren’t put away properly. This lie stopped being effective when the “Toy Fairy” visited and the kids didn’t notice anything was missing. So much for that threat.

6. “We can’t go to the toy store because it is closed today.”

This one for obvious reasons. What trip to the toy store with kids hasn’t resulted in tears?

7. “You get to ride on a horse as soon as you are fully potty trained.”

My daughter needs motivation. She’ll get to ride on a horse eventually, but it’ll be one of those little ponies at the zoo and not one of the gorgeous expensive thoroughbreds behind our house grazing in the pasture.

What lies do you tell your kids? Are there snakes in the trees?

**Big Announcement** We are Knocked Up Abroad Again! When You See Those Bizarre Behavioral Traits In Your Expat Kids