Clicking on the affiliate links in this post support Knocked Up Abroad at no extra cost to you. 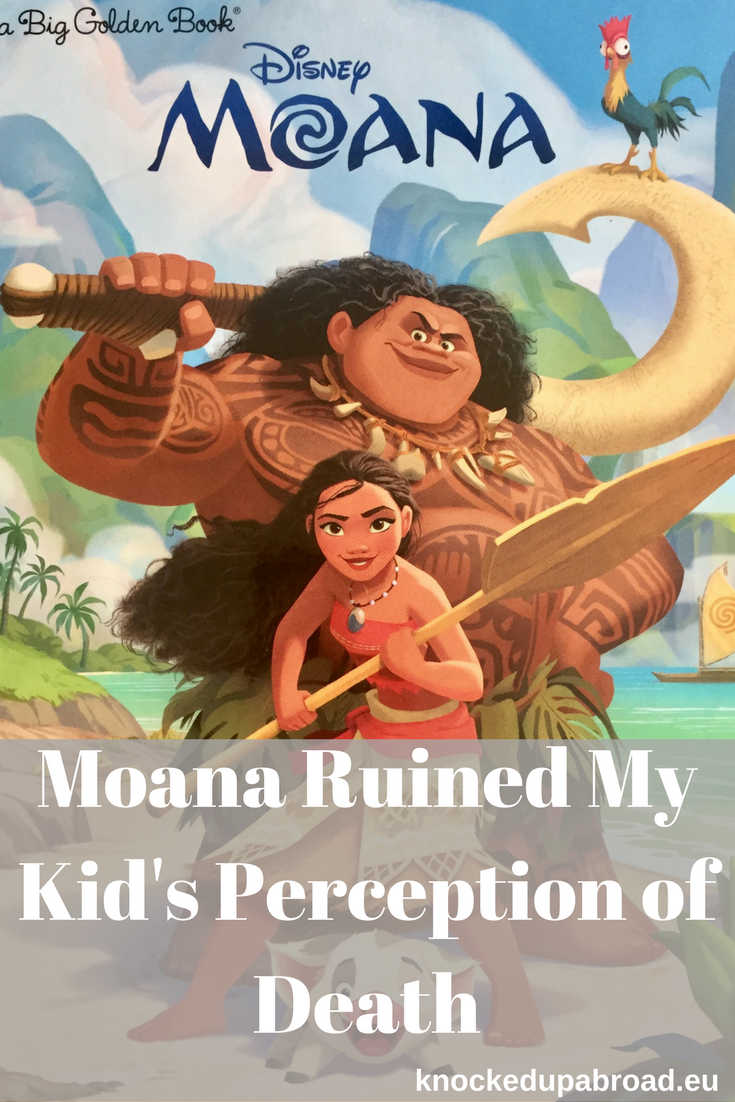 Like many families around the world, when we watched the movie Moana (otherwise known as Vaiana), we fell in love with the strong heroine of the story and her fierce independence. We loved the songs, the humor, the supportive family dynamics—we even loved the ridiculously useless animal sidekick, Hei Hei.

The movie has been played on loop since it was released a few months ago and my kids know all of the songs. My son wants to be a Wayfinder, and he wears his Maui shirt proudly. My daughter found a stuffed toy pig and named him Pua, after Moana’s pet.

While the movie got a lot right, they missed the boat (ha! ocean pun) on one large topic—death.

I have never liked the way death is portrayed in Disney films. It seems like someone has to tragically die for the main character to gather the strength and courage needed to continue. Just off of the top of my head: Bambi’s mother dies, Simba’s father is ruthlessly murdered by his brother and trampled to death by a stampede, Elsa and Anna’s parents are lost at sea, and The Good Dinosaur’s father is washed away in a flash flood.

Good grief, can we stop killing off the parents?

In Moana, both parents are alive and healthy (phew), but the sweet, wise, supportive grandma character dies all of a sudden when Moana discovers that her destiny is to restore the heart of Te Fiti. Why?

It felt like a pointless death hurried into the plot to satisfy Disney’s death quota. She was even a healthy grandma—practicing daily hula by the sea.

So she had a cane, so what? She was walking around in the sand. In sand every day! That’s hard enough for a healthy person let alone an elderly grandma. Anyway, I digress.

Upon the first watching of the movie, my kids didn’t grasp that Moana’s grandma had died during the scene where Moana is setting off from the island at night. I chalked it up to being too subtle. Bravo, Disney, for not making my kids cry ugly tears while watching this movie.

But upon the second viewing, after they knew that Moana’s grandma dies, they cheered at the TV with a, “Hi, Grandma!” as the stingray swims under Moana’s boat. Ummm…I’m pretty sure both of my kids’ grandmas would not be happy with my kids cheering at the news of their death.

Disney represented the grandma’s death beautifully—an illuminated stingray swims under Moana’s boat and helps Moana make it over those first tall waves beyond the reef. In Polynesian culture, recently deceased people can visit friends and family for a short time.

As an adult, I can appreciate the symbolism and cultural accuracy, but my kids didn’t get the subtlety. They weren’t understanding the full gravity of this portrayal of death.

The stingray reincarnation was the first time Disney had ever portrayed this type of death. Moana’s grandmother returns in the form of a vision later when Moana needs reassurance to go on with her plan. I would’ve been okay with a vision but when Moana hugs her, it appears she is there in the flesh.

Woah, that’s not how this works.

Moana’s grandma’s death was confusing, subtle, and counter to everything I have taught my kids about the permanent state of death—mostly in order to teach them a healthy respect for cars and traffic.

[Tweet “Moana’s grandma’s death was confusing, subtle, and counter to everything I’ve taught my kids about death”]

I didn’t realize how Moana’s grandmother’s death impacted their viewpoints until we started talking about our family dog.

Our dog is 13-years-old and she is noticeably slowing down. We’ve had lots of conversations with the kids about how when dogs get older their bodies start to shut down, and they die. You know, all of the conversations you have so you don’t shock your kids into a deep depression when the inevitable comes.

My six-year-old son gets it (I think), and he’s a bit heartlessly pragmatic about it all.

My daughter, on the other hand, firmly believes that our dog will “come back.”

“But she’ll come back, and we can see her again, right?”

No. I had to explain to my daughter over and over again that when someone dies, they cannot come back in a physical form like Moana’s grandma. I explained that our memories are what keep our loved ones alive, but we can’t have a conversation with them like Moana did on her canoe. Maybe in our dreams, we can, but there are no promises.

My daughter still wasn’t getting it, and the more I explained the permanence of death, the more frustrated she became.

Maybe it’s her age (she’s three) or maybe it’s because her second favorite Disney character (Elsa still comes first) was able to hug and talk with her grandma in the movie. That’s confusing for a young kid to see when every lesson I’ve ever taught them is that death is a permanent state.

We continued having detailed philosophical conversations about death. I even left room for the unknown because I don’t really know what happens but I do know that if our daughter is expecting our family dog to come back as a stingray and visit us when we are on a boat, she’s going to be severely disappointed.

I also didn’t want my kids to think that if they run out in front of a car and get squished, that I’ll be happy about it because then they can come and visit me whenever they want wherever I am. No.

I love everything about Moana, but if they had limited Moana’s interactions with her grandma to only verbal, I would love it even more. I have no issues with the reincarnation aspect, but it deserved more explanation than it received in the movie.

Even including a simple line like, “Always carry me in your heart, goodbye Moana,” would’ve helped. Moana’s grandmother says something like, “There’s nowhere you can go where I won’t be with you,” but again, it’s ambiguous if she means spiritually or physically especially when she physically returns at the end of the movie.

The movie got a lot of things right except this large, understandably hard-to-tackle concept of death. I applaud Disney for killing off a character in a less tragically tear-inducing way, but they could’ve cut out one of the many useless Hei Hei scenes in favor of a 10-second explanation about the nature of Grandma’s reincarnation as a stingray.

[Tweet “They could’ve cut out one useless Hei Hei scene in favor of a quick explanation about grandma’s death.”]

What are your thoughts? Did you like the way Moana’s grandma’s death was handled?  Join in the lively conversation here:

Clicking on the affiliate links in this post support Knocked Up Abroad at no extra cost to you.

Book Review: Arrivals Departures and the Adventures In-Between Wherever you go, there you are