Lådbilslandet—Heaven on earth for kids

Imagine an amusement park where only kids are allowed to ride and they receive endless rides on the tea cups, carousel, and trains. Where kids drive cars, motorcycles, and tractors. 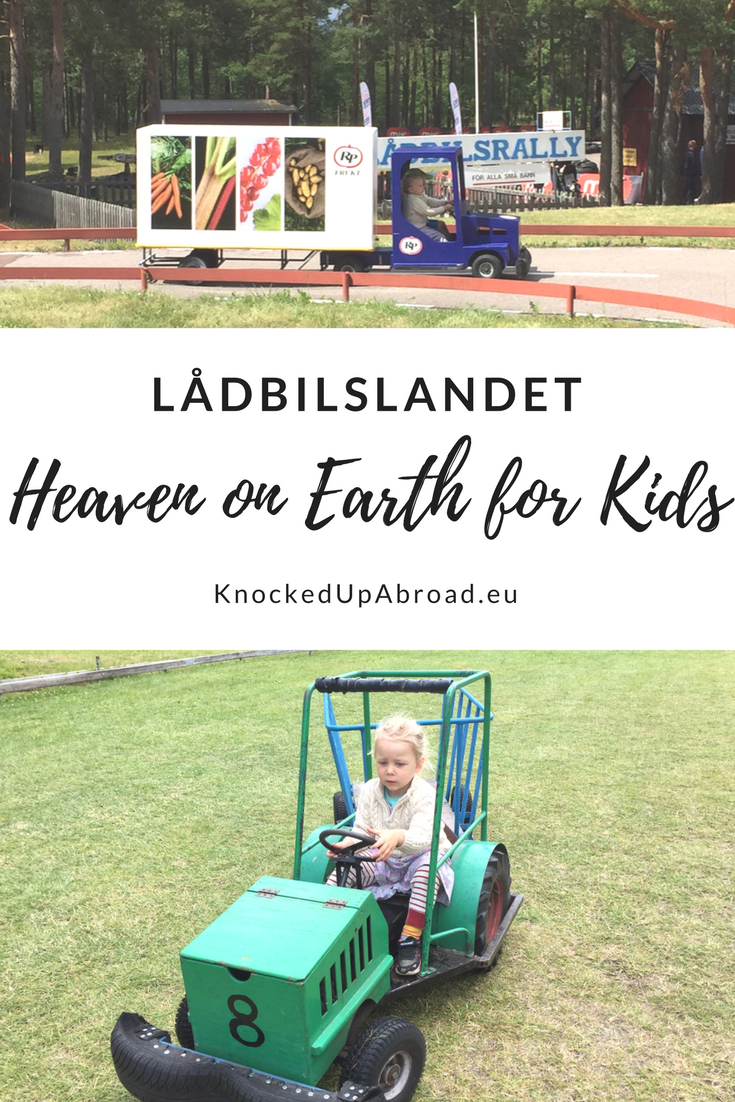 The 1980s are alive and well at Lådbilslandet—or Soap Box Car Land—an amusement park in Sweden with soap box cars, “motorcycles” (they have three wheels so they are more like tricycles with engines), tractors, and river rafts.

Lådbilslandet is a place where your kids can feel like grown ups.

It’s a “kids only” type of place and adults aren’t allowed on any of the rides. Not one. If your kid doesn’t want to ride alone then you’ll need to find a willing child (or sibling) to ride along with them. Honestly, that shouldn’t be hard at all to find since every kid I saw was dying for extra rides.

The kids are really in charge at this amusement park and parents have no choice but to relinquish all pretenses of being in control of the situation. The kids quickly figure out that the grownups are stuck on the sidelines and they discover the awesome power of driving on the open road without any adult behind the wheel.

Included in the admission fee at the Lådbilslandet are six tickets to ride the go-kart rides and unlimited access to the “circus”—an area with bouncy inflatable houses, tea cup rides, an automated train ride through the woods, and a more traditional Swedish wooden obstacle course in the forest. The rides in the circus area are definitely lagom speed (not too fast, not too slow) and are better suited for the younger crowd.

Perhaps it was because we visited the park in Öland before the high season began (we were there July 4-July 12) but the park attendees were very relaxed in their duties. If the ride was already moving and another child showed up behind the chain, the 19-year-old ride attendant would stop the teacups and let the extra rider hop on.

If the kids wanted to ride again, they didn’t have to hop off and file through the line again; they were allowed to stay on and ride as many times as they wanted.

And the ride would start up again for another few minutes.

In short, it was heaven for the kids.

For the adults, maybe it was a bit more stressful version of heaven.

Traffic school without the school

I consider myself to be a fairly laid-back parent when it comes to allowing my kids to do daring things. I give them some instructions before they jump from heights like, “Be sure you’re going to land in a soft spot and remember to bend your knees,” but this was on an entirely different level. “Parental bravery required” should’ve been posted on their entrance sign.

For most of the rides, the go-karts/soap box cars were slow enough that even a head-to-head collision wouldn’t cause any damage or injury. For five of the six rides, I was totally chill. I was a cool mom, not like those other moms.

But for Traffikskola (Traffic School), the biggest experience in Lådbilslandet, I was not a chill mom. I was a nail biting, repress-my-squealing, watch-through-my-hand-over-my-eyes mom.

I thought they would teach my kids how to drive. You know. Like, how they do in Traffic School. Nope. They didn’t teach those kids any rules of the road and the results spoke for themselves.

Traffikskola is THE ride. Kids get to choose what type of soap box car they want to drive and they aren’t just cars. They get to drive grocery trucks, ice cream trucks, fire trucks, police cars, city buses, etc. The options were really awesome.

Traffikskola was essentially a small city created to scale for the kids to drive through. There were bridges, roundabouts, a church, gas station, grocery store, school, and mechanic shop—everything that an actual town would have. Really really cool stuff.

However, since the lagom 19-year-olds manning the park were entirely cool with the kids doing whatever, there was zero “skola” in the Traffikskola. I asked my six-year-old if he had received any instructions and he said, “the guy asked me if I had ever driven before and I just said yes.”

And that was it.

What is super fun about Traffikskola is not just that the kids get to drive on “real roads” in real “traffic” but also that they get to do it for such a long time. I don’t know how the park attendants were timing the kids, but they didn’t wave them in for what felt like an eternity.

Or maybe that’s just how it felt from the parent’s perspective.

Meanwhile, you can see parents on the side of the road coaching their kids in vain attempts to avoid constant collisions. Naturally, none of these kids knew how to drive, so they were driving on the “wrong” side of the road, driving two abreast, and making spontaneous U-turns in the middle of an intersection.

One girl was stuck in a roundabout for a few rotations before she figured out which road she wanted to drive down. This type of chaos was challenging the resolve of even the most laid back, hands-off parents among us.

Despite some really close disasters, we didn’t see any major accidents. A few times, a car would break down, and an attendant would run out to restart the engine, but all in all, the kids did best when the parents didn’t intervene.

What a huge lesson for me as a parent.

The kids, when left alone, totally worked it out for themselves.

[Tweet “The kids, when left alone, totally worked it out for themselves.”]

And nobody was even mildly hurt and they had a blast!

If your kid wasn’t feeling bold enough after driving themselves around all day avoiding the police car go-kart, they can hop on a raft and pull themselves across a nice pond. This was my daughter’s favorite part of the entire park and it looked like a surprising amount of fun. I always forget that sometimes the simplest attractions are the best received with kids.

So, if you’re in the Stockholm or Kalmar area of Sweden, head to Lådbilslandet and remember to leave your helicopter parenting hat at the admissions booth.

There are two locations in Sweden—Nykvarn outside of Stockholm and Öland.

Admission fee: 350 kr/child; Adults are free because you’re not riding any of the rides.

No dogs allowed but you can go in/out of the park as many times as you want.

Food is available on the premises but you are welcome to pack your own picnic. There are plenty of picnic tables and there’s always soft serve ice cream.

Toilets are easily accessible and plentiful—this is a park for kids after all.

Best recommended age: Their website recommends kids between 2-9 years but my three-year-old was a bit nervous. I’d say a precocious three-year-old will be okay or kids in the 4-8 year range are really in the sweet spot for this park.

All kids receive a Lådbilslandet driver’s license when they leave so they feel really grown up and may offer to drive everyone home. Gotta watch out for all of those new drivers on the road.

Why a Simple Vacation Beats a Luxurious One

How to Travel Light as a Family

Pushing the Limits—The Role of the Firstborn Child

Life in the 1800s, I mean, in a Swedish stuga Family Travel Guide to Öland, Sweden