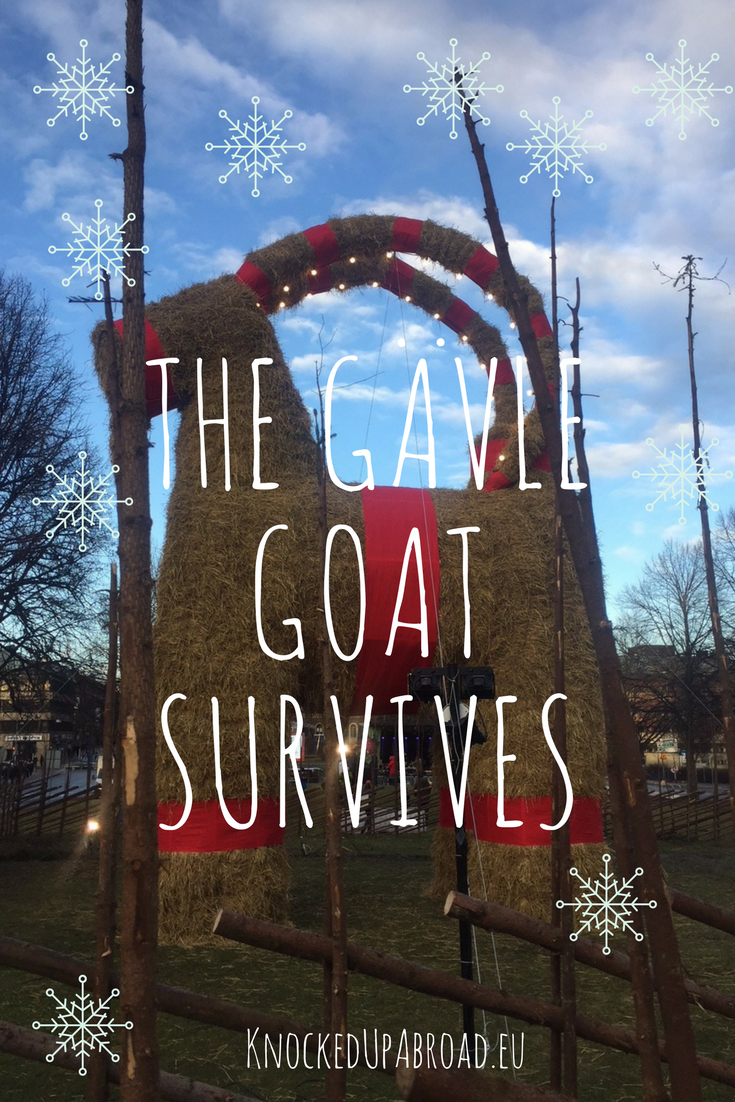 Gävle, Sweden is famous for this oversized straw goat. It’s only famous because vandals burn it down every year much to the sadness of the townspeople of Gävle.

Or are they really sad when the goat burns down? It is hard to tell, exactly, because on one hand, the goat is a main tourist attraction. On the other hand, they sang fire-related “burn it down” songs during the opening ceremony which left this tourist feeling a bit conflicted.

So…do they want it burned down or not?

My guess is, they want to keep the goat for as long as possible but it is somewhat of a foregone conclusion that the goat will eventually meet it’s fiery fate.

We traveled the two hours to Gävle and saw this big goat for ourselves. Frankly, it’s not much to write home about. The town of Gävle itself is somewhat of a normal place, which means it’s kind of boring.

It’s a place where people live and work—the only touristy thing to do was to stand in the cold and marvel at a straw goat in the middle of a park, and then walk the cobblestone streets of Gamle Gävle (their old town).

And that’s really it.

There are Gävle goats for sale as cookies (see above) and decorations. Of course, we bought our own Gävle goat to take home and we are debating whether we will set fire to him on New Year’s Eve or not. He’s pretty cute so maybe not. At the moment, he is sitting on our dining room table, looking very goaty.

I’m sure you’re wondering, “Why a goat? And why does it burn down almost every year?”

Well, goats are kind of biblical, right? and they have been a symbol of Yule way from back from the olden days. Gävle erects their enormous tribute to Yule during the first Advent every year as a means of welcoming in the Christmas spirit.

The first Gävle goat in 1966 was burned down by a vandal on New Year’s Eve and after that, it became a thing to do. Once someone does it, then all of the cool kids want to do it.

The stories of intentional and accidental Gävle goat burning/maiming/destroying are interesting and you can always read more on their Wikipedia page.

One American tourist was duped into thinking that the goat is supposed to be burned down and he was confused when he was arrested for vandalism.

Another year, a few men in Santa costumes shot flaming arrows at the goat.

You get the idea—burn the goat down, but we’ll arrest you.

I guess it’s the thrill of the challenge and prospect of being arrested that makes it fun.

The Kids Meet Elsa and Anna

One of the best parts of Gävle’s opening night was the surprise appearance of Elsa and Anna from Frozen. Never before have I seen a line of kids form so quickly.

Anna was a bit neglected so the kids walked right up to her. Despite it being in the -C degrees outside, Elsa was rocking her dress without any jacket because of course, the cold doesn’t bother her anyway.

Gävle’s Christmas market was very simple. It was held outside and a few vendors were selling handmade wares, straw goats, and elves.

On the whole, though, the market didn’t offer much and while the goat is the main draw, the town doesn’t do the local vendors any favors by not putting more effort into their Christmas market.

(Although, I do think the woman selling the straw goats made a killing as people left the opening ceremony.)

The entire experience was a bit of a let down from all of the hype. It was something we felt like we needed to see but in retrospect, it’s just a big goat. It would be like visiting the World’s Largest Ball of Twine. You stand there and look at it for a second and then leave.

The opening ceremony concert was fun but the kids were tired and cold at that point.

I forced them to stay until the fireworks because we don’t have many opportunities to see fireworks around these parts, so whenever we do, I must see them. The kids ended up being wowed by the fireworks display and enjoyed it but it was on the heels of hours of whining and complaining.

My tip: arrive in Gävle around 2 pm for the 3 pm start. The festivities didn’t start promptly and there was no reason for us to arrive as early as we did (11 am). Afterward, there was a 10k sprint and the runners all had headlamps, which looked like a lot of fun. If you’re feeling sporty, look into that event as a fun add-on experience.

Be sure to check out the other Christmas Markets we’ve visited this season:

Steninge Slott goes commercial but is that a bad thing?

Click here to watch my Facebook Live video about Gävle and hear some sweet live music in the background.