Today is Santa Lucia and children everywhere in Sweden are honoring the faithfulness of an Italian woman and martyr, Lucia.

The year was 283 and Lucia was born to rich noble parents. Lucia’s father died when she was just five years old and in an attempt to look after Lucia, Lucia’s mother arranged for a marriage between Lucia and a rich pagan gentleman.

Unbeknownst to her mother, Lucia had already promised herself to God and vowed to distribute her wealth to the poor. Marrying some pagan guy wasn’t her style and Lucia refused.

Well, refusing to follow through with the marriage arrangements didn’t sit well with the patriarchy and Lucia was ordered to burn a sacrifice in the emperor’s image.

OK, no sacrificial burning? Lucia was sentenced to enslavement at a brothel. (Nice guys, huh?)

When the guards knocked on Lucia’s door to take her to the brothel, they couldn’t move her—she was as heavy as stone.

They purportedly hitched a team of oxen to Lucia to move her and could not.

They set oil and wood on fire around her but she would not burn.

Was the divine intervening on Lucia’s behalf?

The divine managed to put off the inevitable for some time but couldn’t stop the effects of a sword through her neck.

There are different versions of Lucia’s story—that she was tortured by eye-gouging and another that she removed her own eyes after a man remarked on how beautiful they were.

Since this all took place 1300 years ago, who is to say what really happened? However, in all of the stories, Lucia is a badass feminist who was ahead of her time.

She didn’t bend to the wills of the men around her no matter how much they threatened her and she died for her beliefs.

Celebrations around the world

Lucia is celebrated in the Scandinavian countries, Italy, Hungary, The Philippines, and of course, on the island of St. Lucia.

In Sweden, Santa Lucia is the bringer of light and one young girl is chosen to represent her with a crown full of lit candles.

(Side note: She wears a cloth napkin over her hair to catch the melting wax and often takes a break during church service. Smart thinking.)

Her handmaidens wear a wreath of green on their heads and carry single candles in a procession.

Last weekend, we attended our first Lucia concert and it was remarkable. The church was dark and warm and the light from the procession of 25 girls holding candles had a beautiful effect.

In schools, kids dress up as any number of characters—both male and female–Santa, gingerbread kids, star bearers, or Lucia herself. All are welcome to dress as they please and parents can find costumes at the local grocery stores and department stores.

We’ve had a gingerbread boy (pepparkakorgubbe) for years and our daughter has loved playing Lucia.

After the crown of battery-powered candles fell off her head a few times, we substituted the heavy crown for a silver garland tied in a knot. Cheap, simple, and she loves it. 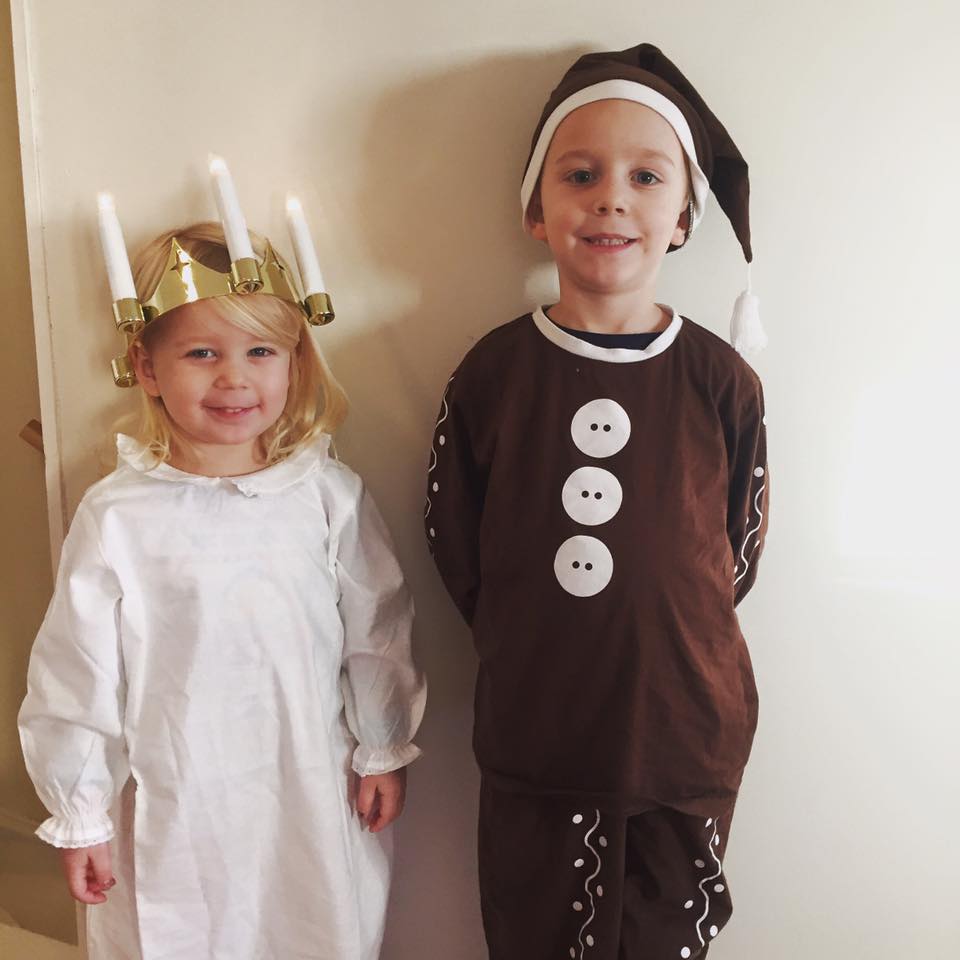 Photography was not permitted in our church during the Lucia procession so please enjoy the one below. It really is a beautiful tradition.

Swedes aren’t a religious bunch but when it comes to lighting candles, they are unrivaled.

Santa Lucia lyrics so you can sing along

Night walks with a heavy step
Round yard and hearth,
As the sun departs from earth,
Shadows are brooding.
There in our dark house,
Walking with lit candles,
Santa Lucia, Santa Lucia!

Night walks grand, yet silent,
Now hear its gentle wings,
In every room so hushed,
Whispering like wings.
Look, at our threshold stands,
White-clad with light in her hair,
Santa Lucia, Santa Lucia!

Darkness shall take flight soon,
From earth’s valleys.
So she speaks
Wonderful words to us:
A new day will rise again
From the rosy sky…
Santa Lucia, Santa Lucia!

Have you read my Christmas children’s book?