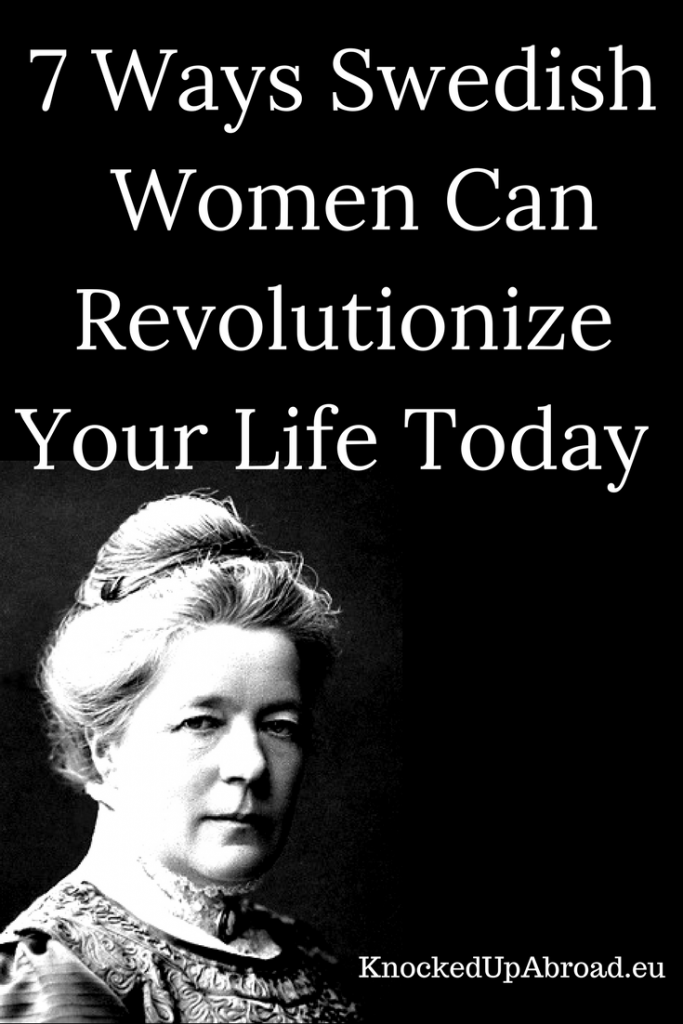 In honor of Women’s History Month, I am highlighting seven largely unknown Swedish female revolutionaries from history. Okay, one of them is really really well known but the women are probably new names for most of you.

Sweden, the first feminist government in the world, has feminist actions and beliefs dating back to the 17th century. It was recently ranked the best country in the world for women and it didn’t get there without the help of some famous women throughout history.

The Law of Jante, common in Scandinavian cultures, diminishes the importance of individuality and focuses on merging with the herd culture.

Every single woman listed below fought against the status quo and subsequently, changed expectations for what women could accomplish.

From saints to anarchists, Swedish women have been breaking the mold for hundreds of years.

After learning a bit of their history, I challenge each one of you to make a difference in your own life in a fraction of the way they did in theirs.

Let’s stand on the shoulders of some giants and see what they were up against in their time.

Before she was considered a saint, Birgitta Birgersdotter, married Ulf Gudmarsson at the tender age of 14. She bore four daughters and four sons—six of whom survived beyond infancy—defying the dismal maternal and child health statistics of her time.

Her second daughter is now known as St. Catherine of Sweden, so this saint herself was also a mother of saints. (Sounds pretty impressive to me!)

Bridget is known for her works of charity, particularly toward unwed mothers and their children.

We can’t all be saints but we can help other mothers and young children when we see them. Channel your inner Saint Bridget and be kind, generous, and helpful when you see a mother struggling with her kids in the grocery store, on an airplane, or at the playground.

Queen Christina, the sole survivor of three children born to King Gustav, was educated as a boy and studied the classics, philosophy, music, dance, languages, history, and horsemanship and marksmanship. Not sure if it was the dress or the education but she was often regarded “more manly” in her mannerisms and behavior.

Christina wanted Stockholm to become the “Athens of the North” and she attracted many scientists to the city. Though a bit odd looking, Christina was intelligent and is remembered as being extremely educated in the 1600s—a time when women were relegated to more supportive roles in the family.

She was not a woman to be silenced. She was fiercely outspoken about her views, her decision not to marry or produce heirs, and she carried herself with the posture and freedom of men at that time.

The best way to honor Queen Christina’s legacy is to be steadfastly yourself, no matter what your religion, sexual orientation, or beliefs. She was not an attractive woman and yet everyone who knew her said that they were impacted by her personality and charm. Hey, we can’t have it all so work with what you’ve got.

Sophie was a Swedish writer and feminist and was the first woman ever to sue a man for attempted rape and win (the famous Sager Case in 1848).

After her case, Sager toured Sweden speaking about women’s rights as part of the feminist movement.

She believed that with proper education, women would gain the self-confidence needed to demand equal rights to men.

The US women’s rights movement really benefitted from Sophie’s influence after she moved to the US in 1854 where she continued to speak out for women’s emancipation.

“I am the one who defies the false ideals of opinion, to enable myself to show my emancipation in my way of life.”

Stand up for what you believe in, even if it is not popular.

Alva was a Swedish sociologist and politician who received the Nobel Peace Prize in 1982.

Before her Nobel Peace Prize fame, she published the book Urban Children (1935), full of new ideas for a transformed Swedish preschool system that addressed both social and economic issues.

If you disagree with your child’s preschool education or want to see things change, get involved like Alva did, and work with the teachers to transform your local schools.

Norwegian-Swedish sex educator, journalist, and anarchist, her main mission was to advance women’s rights to understand and control their own body and sexuality.

A definite revolutionary in her time, she traveled around Sweden and spoke with women and men about ways to protect themselves against STDs and unwanted pregnancies. Her approach became a model for sex education that has inspired what is taught today.

Have a conversation with your child about sex today. Yes, I mean it. I don’t care if they are two-years-old or fifteen, increasing the dialogue around sex can only positive for their future.

Side note: I talk about sex with my kids (ages 5 and 3) all of the time in hopes that they’ll be so comfortable discussing it, that they’ll feel like they can always ask for help if they need it.

My son has some interesting views about sex after watching two birds mate with their beaks interlocked with one another. He asked, “Did you and Daddy bite each other like that when you made me?” Had we never had that initial conversation about sex and animal mating, I never would know what’s going on inside that head of his.

She was the first female writer to win the Nobel Prize in Literature and is best remembered for her children’s book, Nils Holgerssons underbara resa genom Sverige (The Wonderful Adventures of Nils).

A renowned storyteller, Selma combined interesting facts about Sweden’s geography with Nils’ adventures. He was often getting into trouble and traveling to different areas around Sweden.

Introduce fun facts about geography or places of interest on your next trip out of town or on vacation with your family. Kids love learning trivia—usually, the weirder the facts are, the better.

Surely you know the work of Astrid Lindgren, even if you don’t know her by name. If you’ve ever heard the name Pippi Longstocking, Långstrump, Långstrumpf or any variation thereof, it is because Astrid Lindgren’s works are the fourth most translated children’s literature in the world and she has sold roughly 144 million books worldwide.

Best known for her children’s book series, Pippi Longstocking, Emil i Lönneberga, Karlsson-on-the-Roof, and the Six Bullerby Children (Children of Noisy Village in the US), as well as the children’s fantasy novels Mio min Mio, Ronia the Robber’s Daughter, and The Brothers Lionheart.

Lindgren was well known for speaking out for children’s and animal rights. A decade before her death, she was honored with the Right Livelihood Award, “For her commitment to justice, non-violence and understanding of minorities as well as her love and caring for nature.”

If your child has never experienced the wonder that is an Astrid Lindgren story, buy one of her books today. I mean it, today. If you already own a copy, pull out the book and read some chapters tonight to infuse a bit of Pippi or Ronia or Emil’s spirits into your children’s minds.

Anna was a Swedish Social Democratic politician, and a member of parliament from 1980s until 2003. In 1998, she was the first woman to become the Minister for Foreign Affairs.

Lindh is known for her pioneering work towards EU legislation on hazardous chemicals and she called for the establishment of an EU strategy against acid rain. She was outspokenly in favor of Sweden joining the Eurozone before her assassination by Mijailović.

Become more involved in your local politics, be a friend to the environment, and be unafraid in your beliefs.

Do you want even MORE awesome facts about Women in World History? Multicultural Kid Blogs is hosting a series on just that. See below for more awesome women.

Join us for our annual Women’s History Month series, celebrating the contributions and accomplishments of women around the world. Follow along all month plus link up your own posts below! Don’t miss our series from 2016 and 2015, and find even more posts on our Women’s History board on Pinterest:

Written in collaboration with

Parenting: Leave it to the trolls Nudity in preschool? Why not?